Recently the young people from our new club SalemYouth took part in Salem’s AIDS Xperience simulation. This project develops empathy and compassion towards people suffering with HIV/AIDS, and enables a deeper understanding of the experience of someone at risk of contracting this virus. 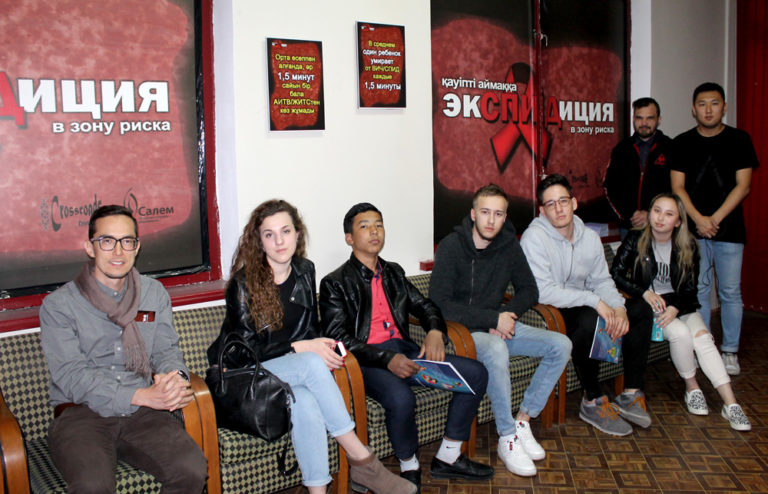 Along with the SalemYouth guys, a journalist from the newspaper ‘South Kazakhstan’, Oxana Sivtsova, took part in the AIDS Xperience, and below is some of her article:

“In order to understand a man, you have to walk a mile in his shoes” (African proverb)

At Salem Social Village there are various projects, but one which began around five years ago is unique – the AIDS Xperience, an experience ‘in the risk zone’. Its description on the Salem website interested me. People are invited to visit Salem and try for themselves to engage with the feelings of people at risk of HIV/AIDS, walking through a model of the stages of their lives. This was the first time I had enountered this kind of approach to giving information about an important medical and social problem, and I wanted to try it out myself.

“The kind of project only exists here and in Hong Kong,” confirmed Arman Kushkimbaev when he met me at the entrance of Salem. “There it was developed by the charitable organisation Crossroads Foundation, who successfully developed this innovative approach and introduced this method of education about global problems in the world. One of these methods includes simulation games, which accurately recreate the living conditions in which millions of people around the world find themselves. And we’re not talking only about those carrying the HIV virus. We have projects modelling the life in conditions of poverty, and what it’s like to only get around in a wheelchair. In this way we teach young people to have compassion and to understand these issues more deeply through personal experience.”

After a short tour around the buildings, we headed up to the second floor, where the ‘risk zone’ itself is located. Of course, there was nothing obviously risky around. To start with, in a small room with me and a few other participants, young people and students, Maksim the trainer talked with us to get a feel for the level of understanding we had about HIV/AIDS. What did we know about ways of getting infected? Could you get HIV/AIDS through spit, being bitten by an insect, through a hug, or even shaking hands? What would our reaction be if a family member or a friend contracted HIV/AIDS? 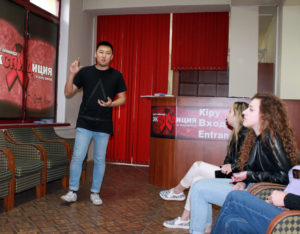 The conversation was relaxed and light-hearted – the young guys and girls were smiling, laughing. Then we each put on earphones, and the real story began. We each listened to the story, based on real events, of the life of someone at significant risk of contracting HIV. We each in turn went through several rooms, as the narrative moved on, which brought each stage of their story to life. You could fully understand how they lived before their diagnosis, and how their life changed after it.

I followed the story of a girl named Kamila. Going from one room to the next, I lived with her through key moments – meeting her future husband, their honeymoon in Turkey, the happy family life of this young couple in their new home. Then her worries after her husband was involved in an accident, her loving care for him, and then telling him that they were going to have a baby. His response – telling her about his HIV infection. In that moment I had so much pity for her, in her sad and irreversible circumstances. But then it really hit me when I had to pull out from the box the result of Kamila’s HIV blood analysis, which was positive…

In a word, the AIDS Xperience is explosive. I felt like a bomb had gone off inside me, and it was clear that the other participants felt just the same, as we realised that no one is insured against such a disaster as this. The people who we walked with were not at all from the vulnerable layers of society, or leading a disorderly lifestyle, as many are used to thinking. They were quite wealthy, prosperous people, who yesterday made plans for a cloudless life, and today have to somehow deal with their diagnosis – and, even more frighteningly, the negative attitude of others.

I know very well that most people, due to insufficient and incorrect information, try to avoid all contact with people who are HIV positive. This is especially true of the older generation, and so youth are in a sense maybe a small step ahead.

But returning to the other AIDS Xperience participants sharing their feelings after their so-called quest, none of them were smiling any longer. It seemed that in just 15 minutes, the time it took to follow the story through all the rooms, these guys had matured for a lifetime. Arman told me afterwards that this kind of transformation of participants has been observed throughout the five years of the project’s existence. So it works!

To date, more than three thousand people have been through the AIDS Xperience. It could have been more, complains Arman, if local government bodies and other organisations were willing to organise groups of students and young people to visit the AIDS Xperience. But those who were invited to do so seem to prefer more established methods of trying to reach young people with this information: boring talks, unnecessary leaflets, and useless flashmobs. If only.